After a considerable time away from hiking in the mountains....thanks to overdoing it last summer and ending up with a bum knee, Gretchen and I got back to the higher elevations on Wednesday.
Usually you can expect to see at least some images of Eelgrass on this blog...even a complete post on nothing but eelgrass but today it's Beargrass that takes its place in the list of "grass" that isn't grass.
It's a very important plant in the Pacific Northwest....check it out here:
http://www.fs.fed.us/pnw/news/2012/11/beargrass.shtml
While I've enjoyed any run in I've ever had with Beargrass, today was special just due to the number of plants on the short 3 mile hike around Naches Peak at Mount Rainier National Park.
See for yourself.  If you don't like Beargrass leave the post now. 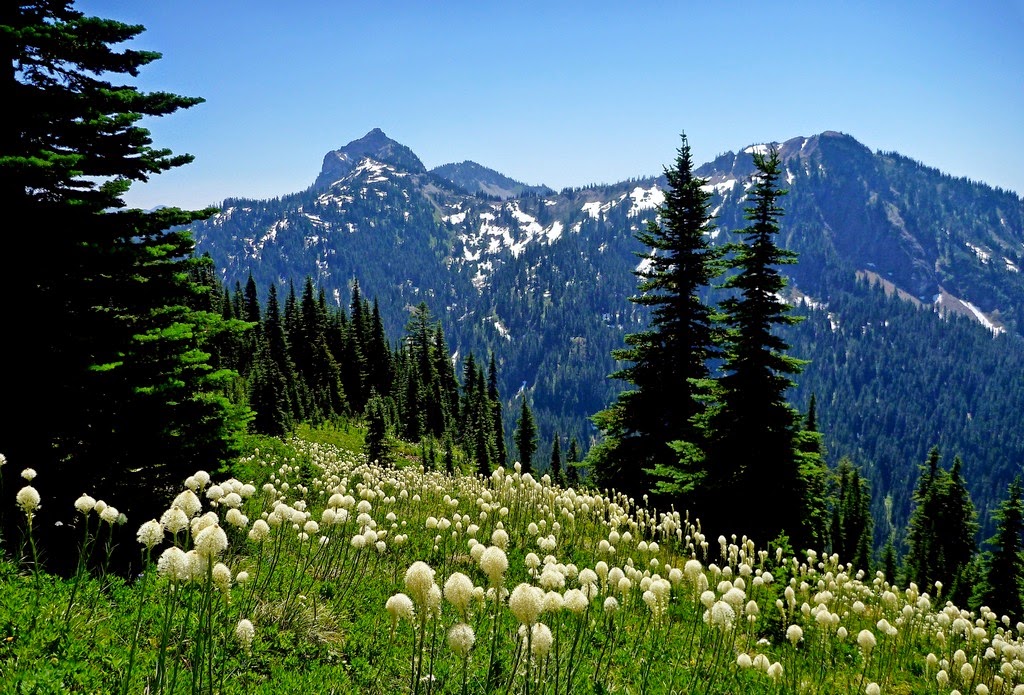 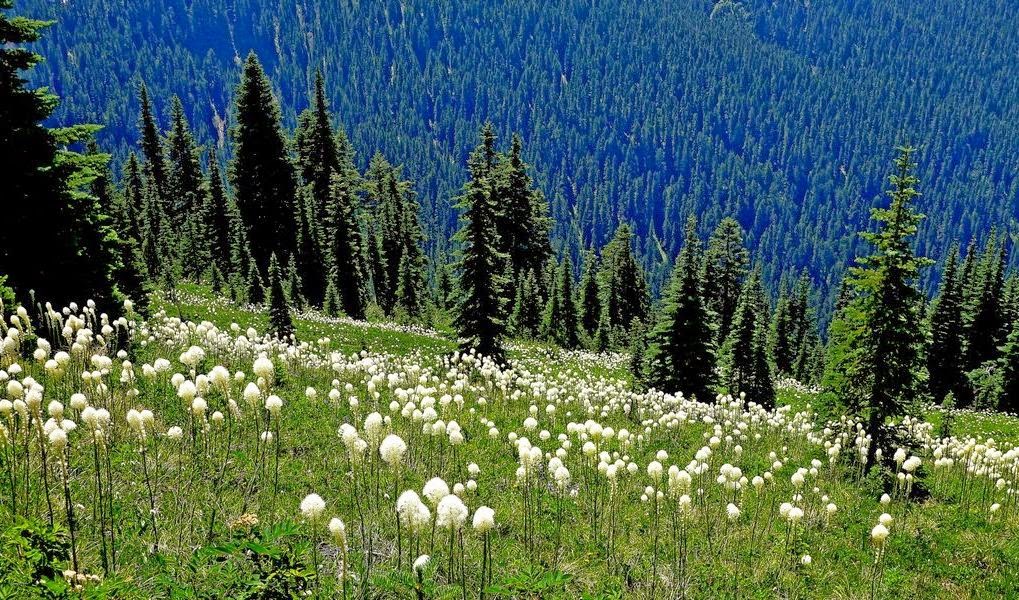 7-13-14  Schmitz Marine Reserve
While there was no official Sea Star Wasting Syndrome survey completed for Schmitz Marine Reserve it was good to see a population of  Pisaster ochraceus and Evasterias t. that for the most part appeared healthy.  The wasting syndrome was present but in only about 10-15% of the population.
In addition one 12 inch Sunflower Star was seen and also appeared healthy.  The seaweed cover was extensive so it is very likely that many sea stars were not seen, so while good news it should not be taken to mean anything positive in the way of a decline in the syndrome in the local sea star population.  A number of juvenile stars were also seen and appeared healthy.
It was a good day for Moon Snail, Sea Lemon and crab observing.....as usual.
A California Sea Cucumber was an unusual find as they are usually in deeper water.  A tiny Sand Dollar was seen on another Sand Dollar.....smallest one I've ever seen on the beach.
It was great to have the extra eyes of Avery and Liz to help spot the critters hiding in the seaweed.
While Seattle was due for 91 deg. heat the beach was kept comfortable by an good north breeze off the water.  Gretchen held her annual Seaweed Foraging class and served up some great seaweed snacks and dips for chips........too bad the Parks do not allow beer.  A few more days of minus tides and then the next good series is in mid August and that's it for good low tides this summer.

Posted by Buzz's Marine Life Puget Sound at 12:16 AM No comments:

JULY 11 2014
On a kayak trip to South Puget Sound we circumnavigated Hope Island State Park and explored about 1/2 mile up the south side of Hammersley Inlet looking for sea stars  This are was home to a large healthy community of various species of sea stars just last year.  Purple, Mottled, Giant Pink, Leather and Sunflower Stars were abundant in the intertidal and subtidal.  Sea Star Wasting Syndrome has hit this area hard.  While we would expect to see 100's of sea stars on a trip like this in the passed but we almost came up empty this trip.  In all we observed at total of 2 Leather Stars, 1 Mottled Star, 3 Giant Pink Stars, and 1 small Sunflower Star.  Water visibility was about five feet so we were able to check both the exposed shore at the minus 2.8 ft. low tide and the subtidal down to about 3 feet..  All the stars seen were in the subtidal except for the small  Sunflower Star.  All the stars appeared to be healthy but it was difficult to know because of the visibility in the water.  Some stars were likely missed due to kelp coverage in many areas, but large boulders that normally are sea star rich were totally without stars.  If our survey is even close to accurate it would mean that this area has lost over 99% of the past sea star population in these species.

The images below show sea stars in the area from previous years trips and images from the July 11 2014 trip.

Posted by Buzz's Marine Life Puget Sound at 6:34 AM 1 comment: