MARINE MAMMALS OF PUGET SOUND﻿
Puget Sound is home to a number of marine mammals.  Eleven species of marine mammals, and one that thinks is should be, are likely to be seen in Puget Sound including the Strait of Juan de Fuca.  A much larger number are commonly seen off the outer coast and are not included here.  Sea Otters included here occasionally wander into Puget Sound but are mainly outer coast animals.  River Otters are not classified as marine mammals but they evidently don't know is so are one of the most commonly seen mammals hanging out in Puget Sound, munching away on marine fare.  If you are interested in additional information on prey items of these animals check out Food Web Relationships of Northern Puget Sound publication with link at
BUZZ LINKS in this blog. 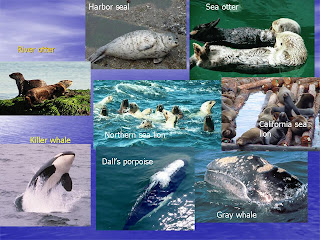 I have placed a link to the slide presentation:  Marine Mammals of Puget Sound in the BUZZ LINKS section.
﻿
Posted by Buzz's Marine Life Puget Sound at 12:18 PM