OK, it's not salt water...but it is soon to mix with salt water of Puget Sound.  So this little hike into the Stilliguamish River watershed fits nicely on the blog.  It's July 10th and you might think, if you live outside the Western Washington area, that by now snow from last winter at a level of 3,500 feet would be gone long ago.  But here in the Cascades and Olympic mountains, due to an extremely heavy snow pack, many years the snow remains well into August even at lower elevations.  So hiking in the Western Cascades often is only snow free for a couple of months each year.  This is true in 2013.
Our Cutthroat Lakes trail passes through an area that receives upwards of 180 inches of precipitation per year, much of it snow.  Plants that normally grow at higher elevations are found lower down is this area due to the extreme snow pack.  Old growth Hemlock, and Cedar form a forest of exceptional beauty and value.  The area is an State Natural Resource Conservation Area as well due to its exceptional qualities.
Yesterday's hike was often on snow...sometimes challenging due to places where the melting snow is undercut by streams making crossing somewhat risky.  The trail remains somewhat difficult to follow as snow covers much of it in the deep woods but happily someone has flagged the route.  In the meadows at 4000 feet snow still covers the large ponds to a depth of 2-4 feet. It will be August before the tadpoles get any direct sunlight in their ponds. Frogs and toads are common in the very cold streams and often can be seen sitting on the snow......hope they have plenty of sunblock.  With all the water from melting snow the bugs were out in full force...more than I can remember seeing on this hike.  Happily a quick splash on Jungle Juice on exposed parts kept them at bay.....Deer Flies were few but always a real pain.....a few will never bother a deer again.  Next purchase; Deer Fly Patches.
I recommend this hike to anyone.....but suggest waiting until August when the trail will likely be snow free, much easier to follow and without the hazards of rotting snow on boulder fields.  R/T distance 8-10 miles depending on whether you hike to Upper Cutthroat Lake or top of Bald Mountain.  Huckleberries are abundant in the meadows around and above Cutthroat Lake by September of SOME years....good berry years also attract numerous Black Bears.  On one late Summer hike we saw three bears in about 10 minutes...all stuffing themselves with berries.
The second and third hikes were at Mt. Rainier National Park.  The hike to Van Trump Park began at a late 4 pm due to car problems (not my car) that ate up much of the day.  However we were rewarded for our lateness as the mountain hid itself in clouds until about 6:30 pm just as we were reaching Van Trump Park for the view of Rainier.....perfect timing.  The early hikers missed the view.  Mt. Goats were also present making for the perfect treat.
Hike 3 was a rather lazy hike to Grand Park via the back door of Lake Eleanor.  While 9 miles is not a short day hike the elevation gain is a modest 1100 feet.  Perfect weather and few people...ah, heaven. 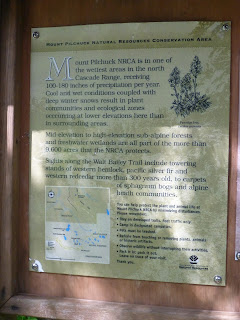 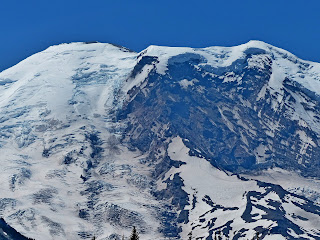 Posted by Buzz's Marine Life Puget Sound at 4:23 AM