The Whale Trail lecture series with Erich Hoyt came to an end last night with a lecture on Deep Sea Creatures, Ants, and Orcas.  That's a lot to cover in one lecture.
He mentioned that during the World Ocean Census that certain areas of the deep ocean bottom seem to be dominated by species of sea cucumbers.  Sea cucumbers always get me thinking of just where we stand in the whole scheme of intelligent life...and why some people have such oversize egos.  If you study development of animals from egg to adult you may find reason to keep your ego in check.  The following will explain it all to you.


WHEN YOUR EGO GETS OUT OF HAND
REMEMBER THIS

1.   There are, among the animal kingdom two main ways animals develop.
2.   As the fertilized egg develops into a small ball of cells (bastula) there begins a small invagination that will grow into either the mouth or the anus.
3.   In protostomes (mouth first) this invagination becomes the animal’s mouth.  (example; the octopus)
4.   In deuterostomes (mouth second) the invagination becomes the anus (or more crudely the asshole). Example; sea cucumbers and HUMANS.
5.   So the sad truth is we are more closely related to the brainless sea cucumber than to the brainy octopus.
6.   And before we got our big mouths we were all just a bunch of little assholes.
7.   And lastly…some people’s personalities develop very early in life…which explains why some people become politicians and others suicide bombers. 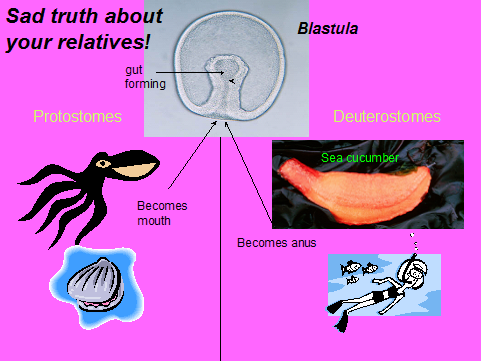 Posted by Buzz's Marine Life Puget Sound at 7:17 AM