Over the past couple of months fishermen at Seacrest pier have been seeing a group of about 8 Harbor Seals surfacing and diving in the area near the pier.  I timed the dives of these seals and they are underwater for about 2.5 minutes then on the surface for about 45 seconds before diving as a group again.  Laura James (are professional, award winning, underwater photographer and educator) stated that divers in the area have observed seals eating Shiner Perch that are abundant in the area.
The pattern of the group is as follows:  The seals surface after a dive and some come up together while others may come up yards away.  All the seals them come together and swim as a group in the same direction within 30 seconds of surfacing.  A seal at the front of the group (leader?) then dives followed closely by the other seals.  In about 2.5 minutes the seals surface again are repeat the process.  This takes place in the morning and perhaps at other times of the day.  In two consecutive days I observed the group moving south and disappearing in the area of Luna Girls sculpture...near Salty's.  I checked Jack Block Park to the south but saw no sign of seals.
For the group of seals to feed on Shiner Perch there must be a large biomass of these small fish in the area.  Other possible foods are squid and other fish and perhaps shrimp.
This is the first time I have observed this behavior in Harbor Seals in Puget Sound but it is likely relatively common.  It is possible that the seals are cooperatively hunting as some other marine mammals are know to do. 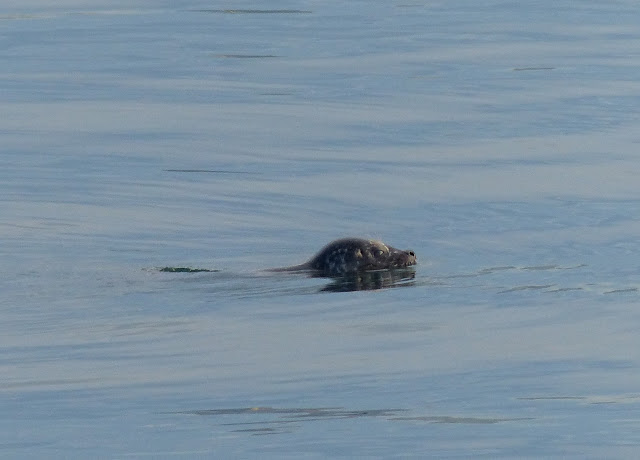 Posted by Buzz's Marine Life Puget Sound at 11:29 AM